Dishes that you can cook using jasmine rice and information on how to cook Thai Jasmine rice.

If you are craving for Asian and Thai food, then these are some of the recipes that you find online so you can easily prepare your very own home made Asian dish.

Asian meals are known for its flavor and spices and the best variety of rice to use for these kinds of meals are jasmine rice. 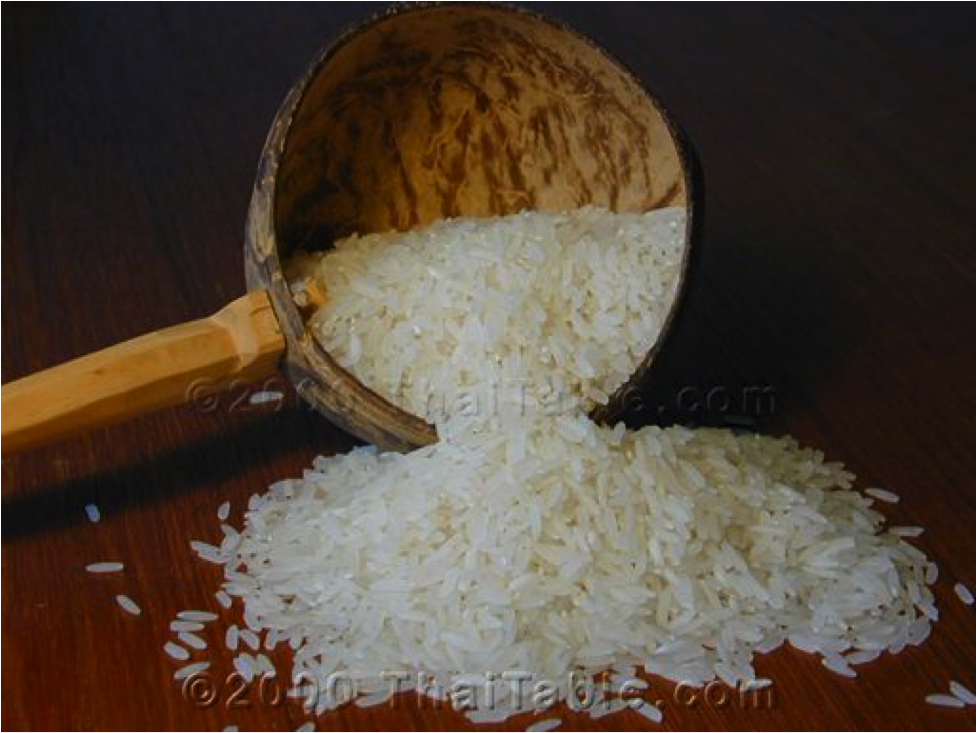 Jasmine Rice is a variety of rice from Thailand that has long grain and it is known for its strong fragrant and taste. It has a sticky texture which makes it ideal when cooking and preparing Thai food.

So how do you cook jasmine rice? It is very easy to cook Jasmine rice. Although it is a sticky rice, cooking it is just like preparing other varieties of rice like the most common white rice or brown rice. To start cooking Thai Jasmine rice, you just need to take the serving size that you want per person and clean it using cold water. After washing the rice several times and the water used to wash the rice is clear already, pour enough cold water to the pot. The water should cover the rice and that there is a thumbs width of water above the rice. Let the water boil and then simmer for about 20 minutes. Open the lid of the pot and let it sit for another 10 minutes with the heat turned off to totally cook the rice.
If you don’t have the time to cook your own Thai Jasmine rice, you can also opt to purchase those microwaveable Thai Jasmine rice that cooks in just 90 seconds. There are even some that comes in boil-in-a bag packaging that has been pre-measured and just needs to be submerged in boiling water and will be instantly cooked in just 10-12 minutes. This lessens the clean up and preparation time so you can still get to enjoy your favorite Thai meals even if you have a very busy schedule.
So if you want a taste of Asia, try out Thai Jasmine rice now when preparing your next Asian dish.

If my daughter got excited with her gifts – a lot of disney gifts for kids particularly the Disney Princesses and a lot of Barbie dolls, I got excited with the holiday food – particularly this yummy, juicy, absolutely delectable with crispy skin lechon from my grandmother! Mom also cooked up a feast – callos, chicken BBQ, two kinds of pasta, crispy pata, salmon and asian salad.

Who knows how to diet when it’s the holidays?!

How about some good old-fashioned home cooking? I have not been posting any home cooked meals lately – either we keep having the same meals or I always forget to take pictures of it. Thankfully, I have the iPhone to quickly snaps pictures of food lately.

We love having quail eggs, hotdogs and milk with this – so it’s a very creamy and yummy meal for the kids!

It’s going to be make-your-house-ready-for-Christmas day for us here! So I am going to be busy setting up our bookshelf speakers with Christmas songs while we put our tree up!

You might run across a blog that at first looks like it’s just another recipe posting or restaurant review site. A closer look, however, will reveal that it’s more than that. It also deals with food preparation and presentation, as well as fine dining and other food-related topics.

For example, you may be able to read about such customs as eating lechon. For those of you unfamiliar with the term, lechon is a roasted or deep-fried suckling pig. This dish is very popular in the Philippines, as well as other countries such as Spain, Cuba, Puerto Rico, and other countries that have a strong Spanish influence or ethnic base. Perhaps foodily.com has a recipe for lechon?

When roasted, the suckling pig is left whole and wrapped in special paper. Upon completion of cooking, the paper is peeled away, and the suckling pig, still retaining his original shape and features, including eyes, nose, mouth, and maybe even little piggy tail, is placed on the table. Sometimes, an apple is placed into its mouth before cooking for a decorative touch and added flavor.

It may be a little unnerving at first to see a whole suckling pig lying on the table, ready to be eaten, but this is part of what makes dining fun. This dish is often served in fine dining establishments in the countries where it is most popular, and its presentation is a very large part of the dining experience.

This is part of the excitement of visiting other places, and they don’t necessarily have to be in foreign countries. Some ethnic restaurants in the United States, especially in neighborhoods where many people of the same ethnic origin live, still practice specific food presentation that reflect their culture or even family traditions. 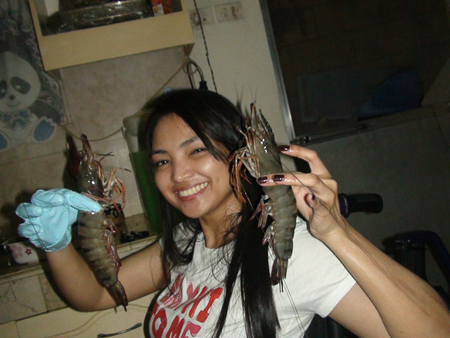 Wouldnâ€™t you want to have shrimp that big everyday for dinner? That is what we ate when we went to my sister-in-lawsâ€™ place last weekend. I love how they love to cook for us everytime we are there

Notice how smooth my sister-in-lawâ€™s face is too? She doesnâ€™t need acne skin care for sure! 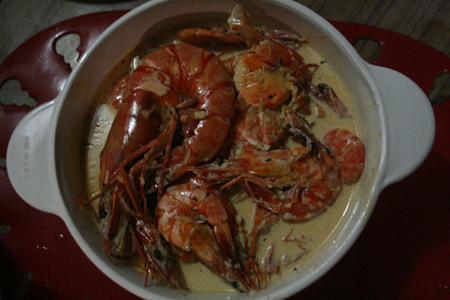 She cooked the prawns in creamy soup and I dont normally eat crustaceans â€“ I hate having to peel off their skin, but I just had to have these!

I have been looking at the right shade of color for the roller shade I am going to install in our bay windows at the kitchen when my husband comes in to tell me that we need to have lechon when we celebrate my fatherâ€™s birthday next month. 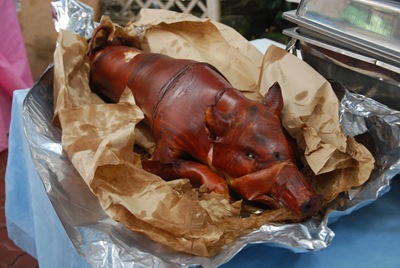 Clearly, lechon has always been a party favorite especially amongst Filipinos!

LechÃ³n is a pork dish in several regions of the world, most specifically Spain and its former colonial possessions throughout the world. The word lechÃ³n originated from the Spanish term leche (milk); thus lechÃ³n refers to a suckling pig that is roasted. LechÃ³n is a popular cuisine in Spain, Cuba, Puerto Rico, Colombia, Costa Rica, the Dominican Republic, other Spanish-speaking nations in Latin America, as well as the Philippines in Asia. The dish features a whole roasted pig cooked over charcoal.

In the Philippines, lechÃ³n is often served with vinegar, lechon sauce (made out of chicken livers or liver pate combined with vinegar, garlic, and pepper),[5] plum sauce, or other sauces, or with other seasonings or accompaniments. When serving lechon, it is usually well decorated with vegetables in a big plate and an apple is placed on the pig’s mouth. Another variation, known as Pritchon, consists of a deep-fried piglet chopped into small pieces and wrapped in pita wedges (Ã  la Peking Duck), and served with an array of special sauces.

It was surprisingly hot last Sunday, even at night, when it supposed to get a couple of degrees lower. It was so hot that I can even afford to eat something like this (and not wish for Amish fireplaces!): 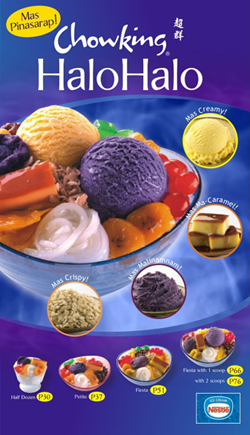 I got the fiesta version, without the ice cream because I can do without the sweetness, thank you very much. This was my reward for a week-long diet!

When you are in Pinas, you need to eat these: 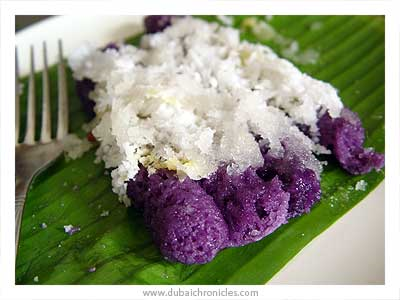 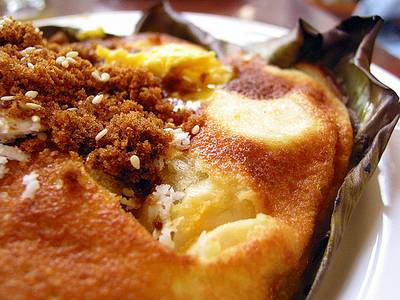 I discovered there is BibingkaKo in SM Dasmarinas and whenever we are there, me and Martha can eat 4 small pieces. Martha can eat 2 cheese flavored ones easily.

Of course, if you love Starbucks, you need to drink their holiday coffee: Dark Cherry Mocha, Praline and Toffee Nut. Out of the three, I havent tasted Praline yet. Im bummed they phased out Peppermint Chocolate. Nakakainis.

I am Maurice and I find pleasure in gastronomical delights that are a feast in the eyes and taste like heaven in the mouth. Join me as I write about what I eat, want to eat and try to cook. I am on a perpetual non-effective diet all the time.